When Futurists Were Visionaries – A Tribute to Barbara Marx Hubbard, Her Run for Vice President, and The Office for the Future

When Futurists Were Visionaries – A Tribute to Barbara Marx Hubbard, Her Run for Vice President, and The Office for the Future 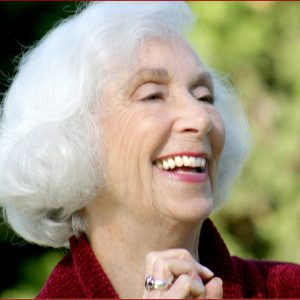 One year ago, on April 10, 2019, we lost one of the great original Futurists, Barbara Marx Hubbard. She was 89 years old. These are some stories about Barbara, a friend and inspiration for 37 years. Did you know that Barbara was not only a co-founder of the World Future Society, she was the first woman nominated for the office of Vice President in the Democratic Party, in 1984?

We met in 1982 when I attended my first World Future Society General Assembly. Barbara, a protégé and devotee of Buckminster Fuller, spoke of conscious evolution and of our journey from separateness to oneness, from weaponry to livingry, and of our inevitable expansion into inner space and outer space. I made sure that we spoke at that general assembly, then in 1983 I attended a week-long seminar that she taught, and the next thing I knew Barbara was inviting me to be her campaign coordinator for the state of Washington for her run for the Vice Presidency in 1984.

The back story on that, as I heard it, was that Barbara was visiting Buckminster Fuller* not long before he died, and Bucky suggested that Barbara enter the political arena to try to change the trajectory of the world. So she did in 1984.

Her idea was to mount a campaign for the Vice Presidency, something that is not generally done, but which it turned out was possible to do. The goals was to win enough Democratic delegates to have her name entered into nomination at the convention which would enable her to speak. As she mentions in her convention speech, she thanks her 202 delegates, so we just made it.

I hope you will take 12 minutes now to watch her speech to the Democratic Convention of 1984. It is a language of vision with a capital V seldom heard from futurists in the 21st Century. More on that later in this essay, but for now listen to Barbara as she so very succinctly articulates a vision so bold that today we may say it must have been a simpler and naïve time. But it was not – Ronald Reagan was president, fear of Nuclear Winter was real, the HIV-Aids epidemic was underway, and the environment was top of mind. But, listen and watch now…

The campaign theme was “To Fulfill the Dream – A Campaign for a Positive Future.” She set out to change the conversation in the nation from what we wanted to get away from to what we wanted to move toward. To that end she traveled the nation and set up Positive Futures Centers, which were collections of local citizens come together, in town after town. Here in Washington state we established several and from them came the delegates to the state caucuses that supported Barbara and her vision.

The Big Idea of the campaign was also the highlight of my work on the campaign. Early on we came together for a 3-day design retreat which I was able to be part of and to help facilitate the process. Barbara’s big idea was that the office of Vice President ought to operate the “Office for the Future.” This would manifest in the development of a “Peace Room” to rival the technology and scale of the War Room. In the latter, there is constant monitoring of global threats, and a place and a way for leaders to come together to confront the threats. The Peace Room, in contrast, would be designed to monitor the globe to map the opportunities that are emerging around the planet, to observe the real breakthrough ideas and programs wherever they are developed, and to plan the positive options to create a preferred future. Intelligence services would be tasked, or expanded, to monitor not just threats but to catalog the breakthroughs. The Vice President would chair the Peace Room as the President chairs the War Room.

We designed, on paper, what the office would look like. I recruited Dr. Ed Wenk, my Ph.D. advisor, to the campaign and to this design retreat. Ed Wenk, then a professor at the University of Washington, had been the first official Science Advisor to the Congress, and had written the legislation that created the National Oceanic and Atmospheric Administration (NOAA).

The campaign came to an end at the convention, as you can see in the speech, as Barbara laid out her vision and endorsed Geraldine Ferraro who actually became the first woman nominee for Vice President or President in the U.S. that year. Barbara hoped that the idea of the Office for the Future might take hold, but Mondale/Ferraro lost badly to Reagan, and the idea died. I have often thought that when, some eight years later, Al Gore became VP for President Clinton perhaps some of Barbara’s dream was manifested. Gore not only pushed environment issues but chaired a National Partnership for Reinventing Government that at least at an unconscious level suggested that some of Barbara Marx Hubbard’s vision had leaked through to the future.

Later, I would have the opportunity to collaborate with Barbara on two more projects. One was called “Humanity 3000” where in 1999-2000, under the auspices of the then existing Foundation for the Future, I was tasked with designing a series of retreat sessions in which leading international thinkers gathered to ask the question, “What will it take for humanity to survive for another 1000 years?” Barbara served on the steering committee for that.

We also took another run at creating a Campaign for a Positive Future among citizens when a number of futurist visionary leaders – Barbara, Robert Theobald, Hazel Henderson, Jean Houston, myself, several others joined forces at a World Future Society meeting, to promote and then run many Positive Future retreats and conferences across the country. The goal, again, was to change the national conversation toward a vision for a preferred future. I facilitated the event in Seattle for several hundred people, and though it was Jean Houston who joined me in that endeavor, it was Barbara who was the driving force and champion behind the entire project. 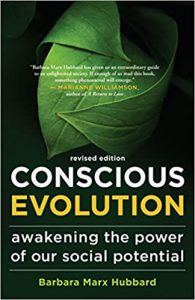 After the dawn of the 21st Century Barbara turned her attention ever more toward her spiritual journey and the Foundation for Conscious Evolution, which was in many ways a long evolutionary continuum from her original “Committee for the Future” that she founded in 1970. She believed absolutely and could articulate more clearly than anyone I have ever known that the purpose of evolution is to lift life to ever higher states of consciousness and enlightenment, and that humans are on a journey to discover our true genius and highest potential. She believed this ultimately included reaching for the stars. Perhaps most of all, if you spent a few minutes with Barbara she would convince you that you, too, had the potential to achieve your highest good and that the universe was just waiting for you to decide.

We miss the capital v Vision of Barbara Marx Hubbard.

Since 1984 when Barbara Marx Hubbard laid out her grand vision, I do have concerns that the field of futures studies (now more often called “strategic foresight”) and futurism as a profession have morphed from one that focused on large-scale societal and global transformation to a field that primarily trains business consultants. Like a variation on the MBA or Organizational Development. Thinking back on those earlier days of futurism or futures studies, most of the prominent futurists or future oriented intellectuals whom I came to know and follow – Barbara Hubbard, Hazel Henderson, Robert Theobald, Ed Lindaman (my primary mentor), Elisabet Sahtouris, Buckminster Fuller, William Irwin Thompson, Alvin Toffler, Marilyn Ferguson, Willis Harmon, Jean Houston, Bruce Sterling, Joe Coates, Herman Kahn, Ed Wenk, Morris Berman, Ilya Prigogine, Fritjof Capra, Peter Russell, John Naisbitt, Russell L. Ackoff, Clem Bezold, Herman Kahn, Bill & Cathy Hainer, Dee Dickinson, Ken Dychtwald, SciFi writers like David Brin, Kim Stanley Robinson, Octavia Butler, Brenda Cooper, Vernor Vinge, plus others were or are primarily interested in evolutionary history, the sweep of the human experience, our destiny as a species, our potentiality, and much less so with how to help a company become more future focused and efficient. The field and more so the world could use that Vision again in this moment, it seems to me.

[*Editor note: the original draft of this blog had this as Margaret Mead. I heard Barbara tell this story many times, but in drafting my piece had it in my head that it was Mead. After checking old notes, it was Bucky Fuller, Barbara’s friend who urged her to run. He died in 1983.]