The Future of Travel – Fodor’s Interview

The Future of Travel – Fodor’s Interview 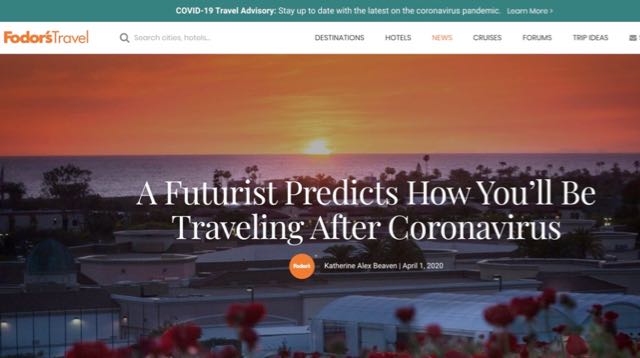 Fodors Travel with photo from The Flower Fields

Both the skies and the roads are deathly quiet, as much of the world inhales and waits. Speculation is rampant that travel will not return to previous levels in a post Covid-19 world. Last week Fodor’s Travel, the quintessential travel magazine, did a piece on the future of travel based in part on an interview that the author, Katherine Alex Beaven, had done with me a few days earlier. She wanted to know my thoughts on the future of travel. I led with this…

It is a few days later now, and the future looks even more uncertain. There are hopeful signs that virus cases may be peaking in many parts of the world. But we have no idea at all yet how the virus may impact the Southern Hemisphere, where it is just making its appearance. Never before have so many scientists turned their coordinated attention to one global problem with high urgency, and this may lead to faster than normal development of treatments. Bill Gates is spearheading the funding of seven production facilities for the production of seven potential vaccines, so that the one that emerges as the best candidate (assuming one does) can be scaled more quickly.

Still, despite these uncertainties, Katherine and I discussed several possible future developments for travel. First, that travel will resume at some point. If the most optimistic scenarios for the virus worked out, travel may actually snap back much more quickly than people assume. We talked about the possibility that domestic travel could return first – international border restrictions could linger, along with people’s concerns, yet people will be hungry to see friends and family. This could lead to a rush of domestic travel, perhaps especially by road.

Security may come to include health screenings and temperature checks as routine. One can imagine a temperature scan as part of the TSA process, and again at the gate for boarding planes or the gangway for boarding ships. Privacy advocates along with airline and TSA resistance may scuttle this, especially in a post-vaccine world.

The cruise ship industry may not go under yet. There are many reasons why this industry has had such growth, and most of them will still apply. But if I was in a cruse line leadership team I’d be meeting with architects now to redesign a section of my ships for illness quarantine complete will all needed medical equipment, negative air flow, and so on, plus planning to add doctors and separate food and service for that section. See the Fodor’s piece for more on this.

At the end of the day, I suggested to Katherine, I would expect travel to rebound to robust levels again, though that may not really commence until 2022 and take some time to recover. And again this is only likely if we can move into a post-Virus, vaccinated world. But, it is in fact the future that I’d hope for, since, as I explained to Katherine,

“The number one benefit of the travel industry, the international travel industry, in particular, has been the knitting together of one world and enabling people to see themselves as part of the world rather than separate from it,” Hiemstra says.