By Brenda Cooper with Glen Hiemstra 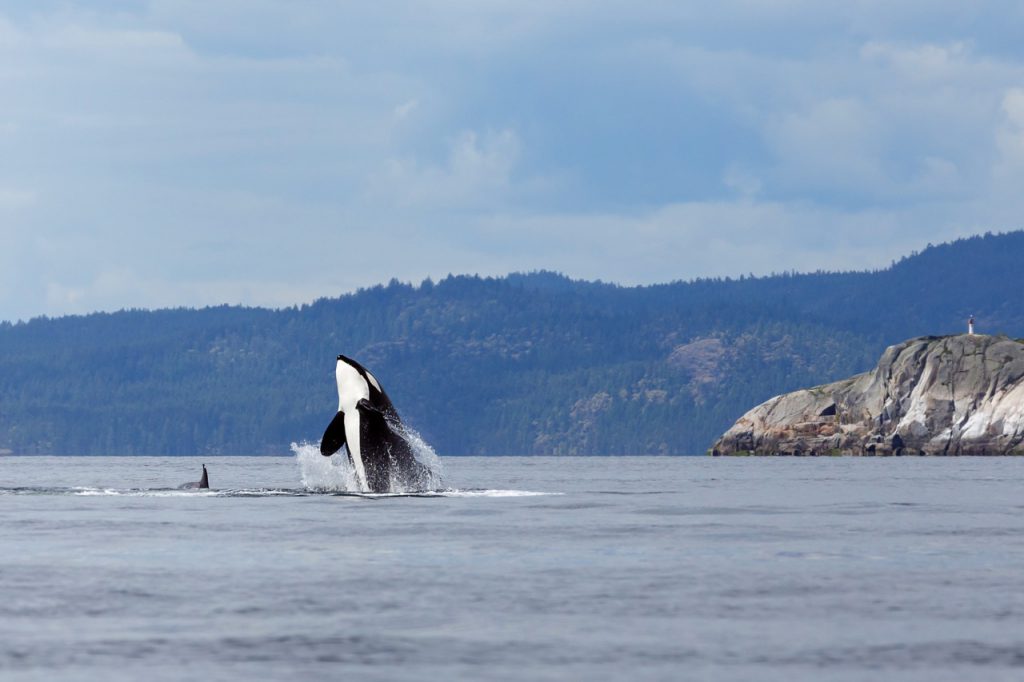 There has been a lot written and filmed and talked about regarding the future of orcas in the last few years. People’s concern for orcas made a difference in SeaWorld’s business model. Right now, there is an opportunity to provide over seventy endangered whales with real, immediate help. We can create a single area in all of their vast territory where they can be free of the noise of boat engines.

Three families of these endangered orcas – the J, K, and L pods — live off the northwest coast and frequent the San Juan Islands. The pods do not interbreed with other orca populations. Either we save, and grow, this population — or they will be no more.

At least three significant threats exist. Their primary food, chinook salmon, is now rare. Both the fish the orca eat and the ocean they swim in are dangerously toxic. Noise from boat engines and propellers stresses whales significantly. Nonprofits and governments are beginning to address both salmon and toxicity. The solutions are expensive, complex, and long term. While critical, this work provides no immediate relief. There is one thing we can do now. We can give them peace and quiet.

Orcas use sound to find each other, navigate, and locate food. The whales make both low and high-pitched sounds that bounce off objects such as other whales, prey, rocks, reefs, and islands and tell the whales about their environment. Thus, whales see with their ears.

The sounds orcas make travel far and fast. But so does propeller and engine noise. The noise from boats can get so overwhelming that orcas cannot hold a coherent conversation any more than two humans can talk to each other during a rock concert. Their ability to find food, to warn each other of dangers, and even to be sure they stay together is compromised by severe and preventable noise pollution.

Often ten or more commercial and private boats watch the orcas navigate the Haro Strait near San Juan Island. Once, one hundred and seven boats were counted following the same pod of whales. We can be as intrusive as paparazzi chasing royals around England. Federal laws do exist. Professional whale watch boats mostly follow the rule to stay 200 yards way from the orca, but this rules does not go far enough.

Whether we are watching the whales to death or merely watching them die may not be clear, but the pods are struggling. Just this month, a young male was found dead, probably after colliding with a boat. Not long ago, J2, a matriarch, was announced as missing and presumed dead. Last year, a twenty-year old male was found dead, as was a calves born that year. As of this writing, there are only 78 whales in these three pods, fewer than anytime before 1986.

Orca Relief Citizens’ Alliance, a non-profit organization based in the San Juan Islands, is proposing a Whale Protection Zone to be established off San Juan Island, which is an area where the orcas are commonly sighted and where the increasingly rare Chinook can sometimes be found.

The Whale Protection Zone would set aside less than one percent of the whales’ Federally designated critical habitat as a place they can have relatively private lives. While it is not enough by itself, such a refuge could make a significant difference. Paired with a permit system to limit and monitor motorized whale watching and important efforts to restore salmon and decrease toxicity, this refuge might provide these whales with a lifeline.

We can’t imagine a future where these whales are no more. Can you? Let’s give them some peace.

Glen Hiemstra is a popular futurist speaker. He is the founder of Futurist.com and a West Seattle resident who joins the rush to the beach if whales are in sight. Brenda Cooper is an award-winning science fiction author, a technology professional, and a futurist who contributes to the Futurist.com Think Tank group.

Brenda Cooper has been delivering keynote addresses on the future for over a decade. Her non-fiction has appeared in The Futurist Magazine and on Futurist.com. She is also currently writing a non-fiction series called Backing into Eden, which is being re-published on multiple websites. Her talks are upbeat and positive, and generally focus on how we can solve the big problems facing mankind right now.