The Future and Aging

The Future and Aging

Last week I had the privilege of presenting the keynote speech on the future and aging to the opening general session of the annual N4A Conference, which is the annual meeting of the National Area Agencies on Aging. It was the 40th anniversary of their creation, and the 50th anniversary of the Older Americans Act of 1965. This was the act that created a national focus on improving the lives of elders in the population, and was of a piece with acts that created Medicare and Medicaid in the U.S.

You can see the presentation slide deck here…

The Future and Aging from Glen Hiemstra 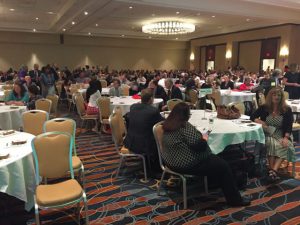 I pointed out in my talk that one of the fundamental differences between then and now is that in 1965 national leadership from President Lyndon Johnson right through the leaders of Congress at the time, Mike Mansfield in the Senate and John McCormick in the House, all had lived through and had vivid memories of the dire poverty in which so many seniors lived in the 1920’s and 1930’s, prior to Social Security, and thus felt a deep visceral stake in improving the lives of America’s seniors. Today, national leaders come from a later time and generally wealthier personal families, and so they are unlikely to ever have personally witnessed seniors living in poverty. And, a national cultural meme has been actively cultivated in the U.S. that if a senior is poor it is their own fault and their own problem. 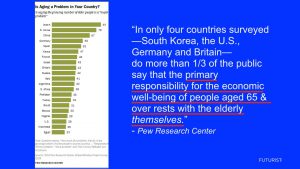 In fact, one study that I cited in my talk, from the Pew Foundation, found that of a variety of nations surveyed regarding attitudes toward aging…
“In only four countries surveyed — South Korea, the U.S., Germany and Britain— do more than 1/3 of the public say that the primary responsibility for the economic well-being of people aged 65 & over rests with the elderly themselves.”

This led into a major point that I wanted to make which is that in contrast to the expectations some have that the next generation of retired will be the most affluent ever, this is very unlikely to be true. In the late 1980’s into the 1990’s the U.S. retirement system was fundamentally changed. Prior to that time, the working concept since the 1930’s was that people would rely on a “three-legged stool” for their retirement income, these being a pension, Social Security, and personal savings. The change made, as most readers know, is that in the late 1980’s the concept of the 401K as a savings vehicle was invented. Initially it was designed to serve as a additional tax shelter and saving vehicle for highly paid executives. However, before long it became the means by which companies and organizations began to shed their defined benefit pension plans and to shift the burden and risk of saving for retirement onto individuals. Some companies made matching contributions and some did not. But one after another they dropped their pension programs, a process that continues today. By now, only about 22% of the working public in U.S. private industry have pensions. The percentage is higher among public employees.

The bottom line is that for an ever increasing number of people the three legs of retirement support have been reduced to two legs now, Social Security and personal savings in IRA’s and 401Ks. But as a number of observers have noted starting about two or three years ago, the 401K system can be assessed as nothing short of a disaster. It turns out, as I said in my speech, the idea that millions of individuals would be better money managers than professional pension fund managers was wishful thinking, to put it mildly. So, today the median household approaching retirement age has an estimated $73,000 in total 401K savings, which is only about $700,000-$900,000 short of what is needed for a retirement income that may match a reasonable percentage of their former household income when working. In other words a looming disaster, as I noted in the speech.

The answer today is to look to increase Social Security by at least 20%, taking whatever steps necessary to make that happen, as proposed forcefully by Duncan Black, a leader in calling attention to the future financial plight of seniors in America. I know this flies in the face of frequent calls to cut Social Security, but it is what must be done. I suggested that this contrast in future alternatives should, I hope, be a feature of the 2016 presidential campaign.

Elsewhere I considered mobility as a big challenge when a car centered infrastructure faces a large percentage of the population who no longer drives. Self driving vehicles are part of the answer I hope. I looked at future housing needs and the shortage of smaller one-story alternatives for seniors, and suggested that various cluster housing designs should be encouraged, as they allow for independent but affordable living.

There was more – on health care, and future technology, and the move of seniors to remain in the labor force – a trend that is growing rapidly.

You can see the presentation slide deck here…