Weather, Climate, Fire and the Future

Weather, Climate, Fire and the Future

Recently I was walking in our Seattle neighborhood, after the warmest June on record. The “emerald city” looks largely like this now, after such a spell of hot and dry weather. We are not at California drought levels, but the summer began with mountain snowpack at 16% of normal, and then rapidly fell to 0% of normal. This has me thinking today about the connection of weather, climate, fire and the future. 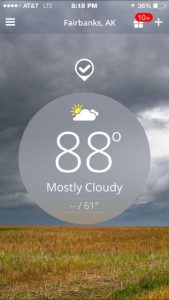 At the same time I’ve been watching the weather in Alaska, and noting for example this recent July 6 temperature in Fairbanks (see my phone screen shot), or the report that Barrow had the warmest June ever there, after the warmest May, as did Anchorage. The Weather Channel produced a time-lapse of the ocean ice melt in June in Barrow during this record heat. And fires rage across Alaska, the most ever as noted on this map. 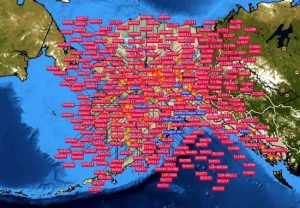 Other parts of the U.S. are wetter than normal, of course, so as all climate scientists will point out immediate weather events are appropriately called “weather” and are not to be confused with long term climate. But if you look at the trends – warmest months, most fires ever, and so on – it seems more likely than not that climate change is having an impact today.

All of this brought to mind an experience that I had 11 years ago, that I recounted in my 2006 book, Turning the Future Into Revenue. This was the story…

I am sitting next to an alpine lake high in the Washington Cascade Mountains. My eldest daughter, age 24, and I have hiked here on a beautiful sunny day in the summer of 2004. Sitting at the highest lake on this hike, however, our view is obscured by smoke from a forest fire, pouring over the crest of the mountains from the East. As we sit on a rock and look at the lake through the smoky haze, I tell my daughter about a science fiction book I am reading, the name of which escapes me these years later. The book is set in a post global-warming world. As it opens parts of the world are so hot that they are simply on fire much of the time, as vast forest and range fires sweep the planet. Intending simply to make conversation, I am surprised when I glance at my daughter and see that she is crying quietly. Seeing my glance, she says, “It just seems so unfair, that my generation will have to live with the mess that yours and those before you have made of the planet.”
Turning The Future Into Revenue, Glen Hiemstra