This year the world of medicine is reporting several big developments and research progress. The University of Louisville is home to the surgeons that performed the first prosthetic bypass graft with the patient’s own stem cells. Although this idea has been around for a while, the ability to utilize this procedure in the operating room is only just now possible. Ultimately, lining the man-made bypass grafts with the patient’s own stem cells improves long term results and increases the likelihood of saving the limbs of those with peripheral artery disease. Saving limbs is not the only accomplishment researchers have made recently. Another major medical breakthrough lays the groundwork for creating a synthetic brain.

Earlier this year researchers at the University of Southern California used nanotechnology to build a carbon nanotube synapse circuit that replicates the function of a neuron. Since neurons are major building blocks of the brain, this means that ultimately we are much closer to being able to create a synthetic brain. In the meantime, this technology could be used for a number of other applications, including treating brain injuries and creating new intelligent systems capable of learning.

The National Science Foundation is also interested in fostering systems capable of learning. The NSF recently announced its $18.5 million grant to create an Engineering Research Center for Sensorimotor Neural Engineering. Housed at the University of Washington, this project will be designed to better understand the body’s scope of sensation and movement. 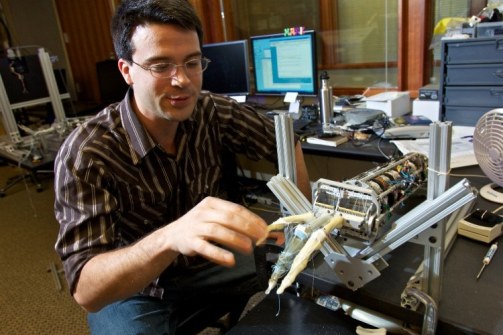 Thanks to research grants and university researchers, we are seeing results from cutting-edge experiments enabled by radical and fairly recent advances in technology. Glen is constantly following new technology in the medical field. Be sure to book Glen Hiemstra at your next speaking engagement to talk more about the future of this industry.