Every observer I know has been surprised by the historic crash in oil prices since July 2008. Many experts, including me, anticipated that the price would certainly fall, due to ending speculation and an economic slowdown, but the price has fallen off an historic cliff. How can this be explained?

A blogger who goes by the moniker of “Gail the Actuaryâ€ (whose real name is Gail Tverberg, and she is really an actuary, in the Atlanta area), has offered an explanation that is as good as any that I have seen. It is more appropriate, perhaps, to call her analysis an exploration, as she is direct in saying she does not have all the answers.

First, oil prices have historically risen and fallen in wide swings. But the current dive is vertical and fast. Gail uses this chart from the Energy Information Agency to illustrate.

This chart is something not seen before, and similar charts can be drawn for gasoline prices as well as diesel. Why? Gail explains…

Thus, she integrates the debt freeze with the fall in oil prices. She goes further, illustrating that almost all economic growth as measured by GDP in the U.S. since 2000 can be explained as an increase in debt. That is, while GDP grew, if you subtract all the debt added in these years, there was no real growth. She charts this here: 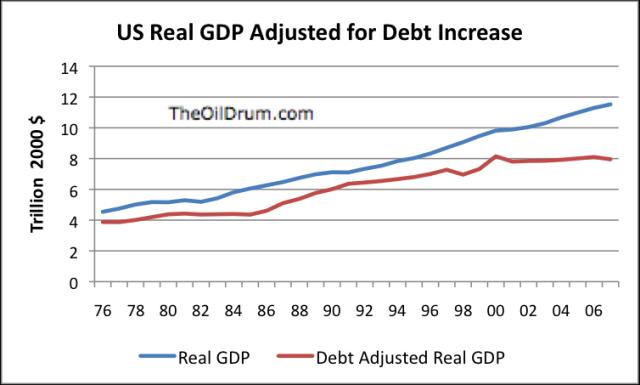 The problem shown clearly in this chart is that since 2000, growth has been a fiction. In past years, GDP growth depended on debt financing in part, but still went up in real terms. Now, the debt bubble not reflected in real growth must, she argues, inevitably unwind. While this is painful in real estate and other businesses, it impacts energy companies too. Suddenly, not only is oil too cheap to justify development of new and more expensive sources, past investments are at risk in the current financial climate. It is this issue that scares Gail, who, by the way, has studied and written on the long term oil situation for years.

Just when the industry was counting on high prices to finance new exploration and development, the prices are gone. Moreover, there is reason to suspect that prices will rebound slowly. Retarding any new exploration and development may be good news from an global warming perspective, but it is risky as the global economy attempts to transition to the next energy era.

Now, I think that economic conditions will improve faster than expected in 2009, as unfulfilled consumer demand builds, stimulus packages are passed and begin to have an effect, and a new administration engenders more confidence nationally and internationally. Still, oil will at best drift upward as economies struggle to recover.

Popular culture of course celebrates cheaper oil and gasoline. But Gail argues that not only do the debt and oil forces interact, but that the debt issue alone is so severe that a new monetary system may eventually be needed, a very radical conclusion. Bottom line Gail warns, is that we may be underestimating the consequences of the oil price crash.